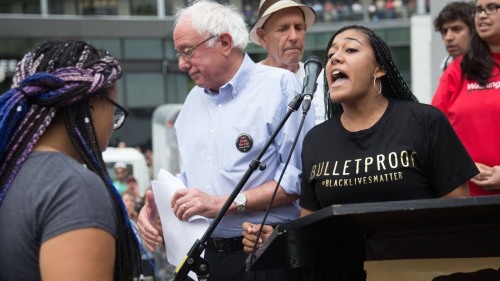 An Interview with Cedric Johnson

Gregor Baszak: Most on the Left claim that the recent cases of police violence suffered by Michael Brown, Eric Garner, Freddie Gray, and others are racially motivated. Some even say that it has an aspect of ethnic cleansing. Do you agree?

Cedric Johnson: The truth is that cops intensively patrol and surveil particular neighborhoods within America’s cities. Blacks and Latinos bear the brunt of this form of policing, which was set in motion by the so-called “War on Drugs.” This has gone on for decades now. Arguments that it amounts to ethnic cleansing or that it is directed against black people have a certain emotive and rhetorical force. However, ultimately they misdiagnose the problem. According to a Justice Department report on arrest-related deaths between 2003 and 2009, including cases where people were killed in car accidents during police pursuits and those who committed suicide during an arrest, blacks are overrepresented (as are Latinos), but they are not in the majority.1 When I present such information to my liberal anti-racist friends and students, they have little to offer in response other than “Yes, of course, whites are the majority of the population, so you would expect their numbers to be higher.” But why don’t those deaths figure into the conversation? Isn’t it possible to condemn police violence against blacks while simultaneously demanding justice for all victims? What do these victims—black, white, Latino, male and female—have in common? Why do so many Americans view the current crisis strictly in terms of anti-black racism, when we have evidence that suggests we are facing a more complex and more daunting problem, one that cannot be addressed with yesteryear’s analysis and slogans? We need a more dialectical appreciation of historical progress: How have the defeats and victories of earlier anti-racist struggles produced new social contradictions, altering the conditions we now confront? Additionally, when we look at those who carried out the killing of Freddie Gray, three of the six police officers involved were black. In the case of Eric Garner, a Latino officer choked him to death. So, the fact of integrated police forces needs to be considered. These individuals are not motivated by racial animus. Rather, their behavior reflects a mode of policing that targets the working class, the unemployed, and those who live in areas where the informal economic sector is dominant. On the national level, even in rural areas, small towns, and places where blacks do not live in large numbers, the same dynamics are at play with whites and Latinos. This is the dominant means for managing social inequality in an era of obsolescence and pervasive economic insecurity.

GB: For Michelle Alexander and her many followers on the anti-racist left, these are instances of a “New Jim Crow.” How do you respond?

CJ: The same. If you look at the prison population, blacks are not the majority. African Americans are certainly overrepresented, and in certain states they constitute a majority of those incarcerated or under court supervision. Therefore, we are not looking at something motivated exclusively or even primarily by racism. I’m not suggesting that the system is not racialized, or that racist policing is not a part of the equation. It is. But there is much more that we need to get a handle on, especially if we want to build a movement powerful enough to change the current state of affairs.