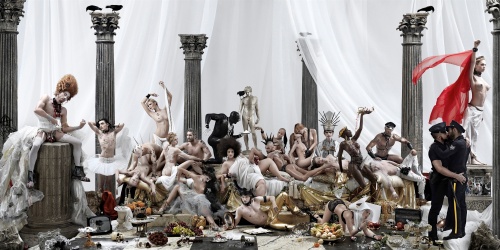 Cultural pessimism is as old as human culture and has a long history in Europe. Hesiod thought that he was living in the age of iron; Cato the Elder blamed Greek philosophy for corrupting the young; Saint Augustine exposed the pagan decadence responsible for Rome’s collapse; the Protestant reformers felt themselves to be living in the Great Tribulation; French royalists blamed Rousseau and Voltaire for the Revolution; and just about everyone blamed Nietzsche for the two world wars. Though a minor work, Soumission is a classic novel of European cultural pessimism that belongs in whatever category we put books like Thomas Mann’s The Magic Mountain and Robert Musil’s The Man Without Qualities. [nyrb]

Was all this refinement, all this decadence, this misanthropy and disillusionment, were all these religious agonies and scruples merely the sublimation of a longing for the sedate pleasures of a bourgeois life? [Knausgaard]