The Apocalypse That Threatens 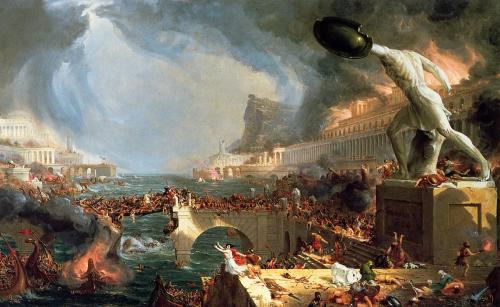 I grew up around adults who had made it through the Second World War—by leaving Europe in time, evading or refusing the draft in the United States, or by being among the lucky ones to survive a spell in a concentration camp. Many of these people expected a new world war in the 1950s, given the fierceness of the U.S.-U.S.S.R. rivalry, and were particularly apprehensive of a coming nuclear holocaust. Later, I met people who had left Europe for South America to be safer from radioactive fallout when the war came, and others who thought of moving—or actually emigrated—to Australia for the same reason.

As it turned out, the expected nuclear conflict between the great powers did not take place. Instead we had—developing out of the anti-colonial wars of national liberation that followed World War II—a series of murderous proxy wars in Asia, Africa, and Central America, in which local conflicts were provoked or magnified by big-power involvement. The collapse of the Soviet Union in 1989 led to an apparent diminution of the threat of superpower mutual assured destruction, although both Russia and America continued to maintain fleets of planes, ships, and missiles armed with nuclear weapons, while the number of nuclear powers expanded. War continued on the periphery of the economically developed areas, as ethnically oriented forces fought to reorganize control of the Balkans, Central Africa, and various Asian countries, while what amounted to army-sized gangs fought over control of natural resources—diamonds and other minerals, oil, grazing land—in Africa and drug routes in Central and South America.

At the same time, of course, the “advanced” nations had not given up their interest in war. The last decade of the Cold War saw the U.S., in addition to its continuing gigantic military expenditures, investing billions in creating an army of Islamists to drive the Russians out of Afghanistan. The jihadists had wider interests than those that suited the Americans, involving the destruction of governments in Saudi Arabia (despite Saudi support for jihad) and Egypt, along with Israel—all allies of the U.S. With the help of the “poor-man’s air force”—car and truck bombs—Islamist fighters pushed the Americans out of Lebanon and destroyed military bases and embassies in Saudi Arabia and Africa, along with a warship and other military installations. On September 11, 2001, the Americans could no longer pretend that this fight did not directly concern them. When the Bush administration took advantage of the situation to demonstrate American might by attacking Iraq, the result was unmitigated disaster: the removal of Saddam Hussein’s regime led directly to a renewed sectarian struggle between Shia and Sunni wings of Islam which, in combination with the complex national and ethnic rivalries of the region, has turned the Middle East into a living hell for its inhabitants, driving millions of them into exile.

With the most recent turns of these events—the emergence of the Islamic State out of the Mesopotamian branch of Al Qaeda and, in the last weeks, the IS’s turn to terrorism abroad—why not just admit that the Third World War has come? (I’m hardly the first person to have this thought—besides the ever-present Pope, for instance, Iraq Foreign Minister al-Jaafari called the Paris attacks a new stage in an ongoing world war.) It did not start, like the first two, with formal declarations of the major world powers. Instead, it emerged gradually, in the context of big-power rivalry and in a world system lacking alternative means for settling conflicts over such basic questions as the control of resources. It is fueled by the worldwide availability of weapons, from the ubiquitous AK-47 to sophisticated truck-mounted missiles, that flooded the world to meet the needs of various proxy wars (and let us not forget the sizeable contribution made by arms production to American, Russian, Chinese, French, and Israeli GDP), in addition to the billions of cars and tons of fertilizer available to ever more ambitious bomb-makers the world over. Unlike in the earlier world wars, sides are not clearly defined: In Syria, for example, Turkey, officially a Western ally, is more concerned to prevent the emergence of a Kurdish state than to support the war against IS, now fought most successfully by the Kurds; wealthy Saudis fund jihad, while the Saudi air force bombs jihadists in Syria (and anti-jihadists in Yemen); the U.S. and Iran find themselves on the same side vis-à-vis the Afghan Taliban and the IS, while they are otherwise fierce enemies; France and Russia, at odds over Ukraine, coordinate bombing runs in Syria. But this very confusion of “sides” constitutes the new globalism of the war, which can no longer be localized, but is as liable to pop up in New York or London as in Mali or the Philippines.

Another novel feature of this world war is the difficulty of imagining an end to it. Even in Syria, taken by itself, the fragmentation of anti-government forces and the incoherent relations between the outside forces involved makes it unlikely that the Assad regime—even if it were stronger than it is, and even with considerable foreign assistance could defeat them—any more than the Russians were able to defeat the conflicted forces that opposed them in Afghanistan.1 And the poor prospects of “solving” the “problem” extend beyond the Syrian situation. One can get a sense of the apocalyptic open-endedness of the global struggle from reading expert opinion: The hardest line in a recent sampling of strategic thinking on what to do about the IS came from Shabtai Shavit, a former chief of Mossad, who declared on Israeli radio that “we have to push aside arguments on law, morality, and comparisons of security and the rights of the individual.” Instead we need to do “what they did in World War II to Dresden. They wiped it off the map.” But as an expert on Mideast affairs at the Brookings Institution commented, this would just produce “a wave of terrorism the likes of which the world has never seen.” Perhaps this dilemma could be resolved by the invention of an alternative “constructive” version of Islam, able to displace the hold of jihadism on the hearts and minds of large numbers of Muslim young people. Beyond religious reformation, what is needed, as the New York Times summarized the opinions of various tank-thinkers, is “greater accountability” of Middle-Eastern governments, along with “fair justice, better schools, more job prospects.”2

A tall order, you might say. (While we’re at it, why not provide jobs and decent living conditions, along with an end to police harassment, for the vast Muslim population crammed into the slums ringing French cities?) At least such views involve recognition that today’s jihadism—which is not a traditionalist revival, but a contemporary product, widely inspired by the writings of Sayyid Qutb, the Moslem Brotherhood activist executed by Nasser in 1966—is a response to the failure of postwar capitalist growth to extend to the formerly colonized areas of Africa, Central Asia, and the Middle East. It is this failure, matched by the failure of Arab socialism and secular nationalism to produce governmental accountability, fair justice, better schools, and good job prospects, that has led to the religion-based rejection of “Western” modernization and facilitated the recruitment of tens of thousands of Muslims from around the world who are ready to kill and to die in the effort to construct a socially meaningful existence within our stagnant social and economic system. The idea that a “moderate” version of Islam cooked up by West-friendly imams could displace the real Islamic reformation, the Islam for our time, worked out by Qutb and advanced by Bin Laden, al-Zarqawi, and al-Baghdadi, only testifies to the bankruptcy of the official political and cultural imagination.

The failure of the revolutionary wave that followed World War I allowed capitalism another chance; the depression and the new world war to which it led opened the way to a new period of prosperity, the postwar “Golden Age” that ended in the mid 1970s. The receding tide of economic growth, which has allowed the accumulation of riches in a few hands and places while leaving the great majority of the earth’s people a decreasing share of the wealth they generate, has eroded the hope of progress that once helped people tolerate life under capitalism. With a future this bleak, it is not surprising that we see the creation of all sorts of backward-looking apocalyptic practices, from various forms of Christian fundamentalism at play in the U.S. to Jewish ultra-orthodoxy and the Islamic State. What we are witnessing is not a “clash of civilizations” but the self-destruction of one civilization, the one that once proudly called itself “modernity.” As Adam Schatz observes in a penetrating article:

The attacks in Paris don’t reflect a clash of civilizations but rather the fact that we really do live in a single, if unequal world, where the torments in one region inevitably spill over into another, where everything connects, sometimes with lethal consequences. For all its medieval airs, the caliphate holds up a mirror to the world we have made, not only in Raqqa and Mosul, but in Paris, Moscow, and Washington.3

The apocalypse that threatens is thus not the one promised by the various gods invoked by the world’s cults but the one produced by capitalism’s inability to manage the forces it has itself unleashed. The world’s leaders seem to finally understand that climate change is a real problem, for instance, but it is generally assumed that the coming climate talks in Paris will produce very little of the change necessary to avert the worsening of the ongoing catastrophe. The economic (and therefore political) interests that would need to be shoved aside are simply too powerful because they are too basic to the way world society operates. Similarly, while the limitations of the capitalist economy make it impossible to solve the social problems generating the misery behind the global jihad, the leading nations are structurally inhibited from addressing the resulting situation by any but military means. Military means have become central to the very functioning of the leading economic power: As Gabriel Kolko pointed out in his valuable book, Century of War, following World War II the U.S. military budget “became a very crude surrogate for public works or social measures and alone made government deficits possible […] thereby sustaining the general economy […] The very existence of military preparations carried with it an inherent propensity for activism, with all of the consummate risks that entailed.”4 But even states not as dependent on military Keynesianism as the U.S. have economic as well as political investments in militarism. And, finally, what else are they to do?

As a result, the major states are trying to behave like “great powers” at a moment when there are no longer any great powers in the 19th-century sense, a moment when the forces constricting the global system exceed the strength of even its strongest elements. The result is the barbarism Rosa Luxemburg warned about, as the alternative to socialism. The third world war may well turn out to be the most terrible of them all if the earth’s population does not put a stop to it, by breaking once and for all with the conditions that are producing it.