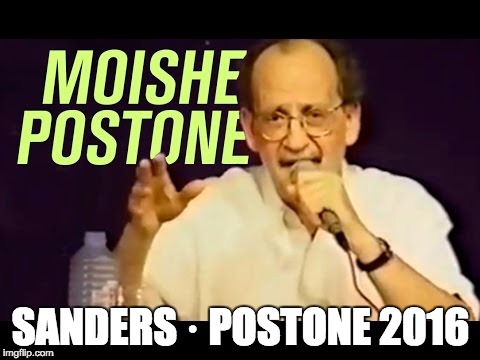 Moishe Postone, son of a Canadian Rabbi, received his Ph.D. from Johann Wolfgang Goethe-University in 1983.

His research interests include modern European intellectual history; social theory, especially critical theories of modernity; twentieth-century Germany; anti-Semitism;[1] and contemporary global transformations. He is co-editor with Craig Calhoun and Edward LiPuma of Bourdieu: Critical Perspectives and author of Time, Labor and Social Domination: A Reinterpretation of Marx’s Critical Theory. He is also co-editor with Eric Santner of Catastrophe and Meaning: The Holocaust and the Twentieth Century, a collection of essays that consider the meaning of the holocaust in twentieth-century history and its influence on historical practice. Postone’s work has had a large influence on the anti-Germans.

He was originally denied tenure by the University of Chicago’s Sociology Department, sparking a great deal of public resentment from graduate students whom he had been involved in teaching. He was later granted tenure by the History Department.

Today Moishe Postone is the Thomas E. Donnelley Professor of Modern History and co-director of the Chicago Center for Contemporary Theory.

Capitalism as a historical specificity

In 1978 Postone started a critical analysis on Marx’s theory of value.[2] But Moishe Postone’s most distinguished main work, ‘Time, Labor and Social Domination’, was published in 1993 (translated into French in 2009 and Japanese in 2012).

In his works he proposes a fundamental reinterpretation of Karl Marx‘s critique of political economy, focusing on Marx’s original concepts value, capital and labour. Inspired by heterodox Marxist thinkers such as Isaak Rubin, Roman Rosdolsky, etc., and certain authors of the Frankfurt School, e.g., Sohn-Rethel, who remained marginal to that school, he shows that the assumptions of the ‘pessimistic turn’ of Horkheimer were historically rather than theoretically founded. Postone interprets critical writings on Marx’s economics, especially in its Capital 1 edition, and Grundrisse, as the development of a social-mediational theory of value.

Marx’s Capital: a critic immanent to its purpose

Postone thinks that in writing the ‘Grundrisse‘ Marx concludes that adequate critical theory must be completely immanent to its purpose. The criticism cannot be taken from a point of view external to its object, but must appear in the mode of presentation itself. Das Kapital is so structured, for Postone, with a surface level immanent to political economics discourse and a deeper layer which comes through later, which makes it particularly difficult to interpret. Indeed, precisely because of the inherent nature of the format Marx uses, the object of the critique of Marx has often been taken as the standpoint of this criticism. For example, not only is the categories of exchange valuehistorically specific to the capitalist period, but also value’s basis, the capitalist form of wage labour, must also be historically specific, and does not apply conceptually to other periods. The methodological sections of the Grundrisse clarify therefore not only Marx’s presentation, but other sections make explicit that the categories of capital such as value and exchange-labour, are historically specific to the capitalist social formation. The so-called labour theory of value is not a theory of the material wealth created by labor but is in a parallel manner also seen when looked at transhistorically as “human metabolism with nature.” Precisely because it is not structured immanently, the ‘Grundrisse’ provides a key to read Capital. This is the key to the reinterpretation of the work of mature Marx, with which Postone works.

Against the traditional critique of capital from the standpoint of labour

Starting in this demonstration of the historically specific character of what Marx critiques, Postone then provides a new critical theory that attacks the very essence of capitalism: the form of labour specific to the capitalist social formation. Indeed, in non-capitalist societies, work is distributed by overt social relations. An individual acquires goods produced by others through the medium of undisguised social relations. Work activities derive their meaning and are determined by personal relationships, openly social and qualitatively specific (differentiated by social group, social status, the wide range of customs, traditional ties, etc.). But in a capitalist social formation, “the objectification of labor is the means by which goods produced by others is acquired; we work to acquire other products So someone other than producer that uses the product (as well as use value) – the producer, it serves as a means for acquiring work products from other producers. It is in this sense that a product is a commodity. It is both use-value for each other and medium of exchange for the producer. This means that the work has a dual function; on one hand, it is a specific type of work that produces goods individuals to others, but on the other hand, the work, regardless of its specific content, is the producer of means to acquire the products of others. This feature of the work, which is specific to the social life in capitalism, is the basis of modern socialization, is called “abstract labor.” In the functioning of these new social relationships, labour under capitalism is no longer an external activity to capitalism. It is the foundation of capitalism, and so is the labour that must be abolished.

It appears increasingly today that the new concept of “commodity fetishism,” which has nothing to do with a hoax of consciousness (an inverted representation), is the central part of the intellectual heritage Marx. “Commodity fetishism” is not only a misrepresentation, much less an exaggerated adoration of goods. The “fetish” instead is to be referred to the structure of the commodity. It is then a theory of “objective fetishism” (Jappe) or radicalized, that is to say, so long as value (the objectification of the specific function of the spirit of labour under capitalism), the goods and money, society is actually governed by the self-movement of created things themselves, and not by the subjective manipulation of the ruling classes. The subjects are not men, but it is rather their objectified relationships that are at the heart of socialization under capitalism. Fetishism, Postone notes, must be analyzed “in terms of the structure of social relations constituted by forms of praxis and its seizure by objectifying the category of capital (and hence value). The Subject for Marx, like Hegel is so abstract and can not be identified with any social actor whatsoever “(Postone, Time, p. 75-76). This is the world where abstract labour (which is not immaterial labor) becomes the social bond, social mediation that mediates itself, reducing actual work to a simple expression abstract labor. Abstract labor is then the source of alienation. The self-moving subject, Spirit, Geist, is misrecognized in Hegel, it is described by Marx as Capital and its self-valorization. It is not, Postone suggests, similar to Lukacs‘ use of Hegel, wherein the proletariat are identified as Spirit, for then spirit would be labour not emancipation.

It is from this concept that we can build a radical critique of the commodity, money, value, labor and politics, that is to say, a critique that is not limited to describe the struggles around management and distribution, the “class struggle” as traditionally understood, but recognizing that these categories themselves are problematic: they are specific only to capitalist modernity, and are responsible for its destructive and self-destructive nature. Pointing out that the market is a mere mechanism of distribution, and so is secondary to the core of capitalism allows Postone to broaden the historical scope of Marx’s theory and so it can, with equal validity, be applied to what was the USSR. In the USSR the main difference was that instead of a market handling distribution it was planners; however, the abstract exchange of labour, which is the core of capitalism for Postone, was as it was in the West.

Modern antisemitism and the destruction of the abstract

In his 1986 article, Anti-Semitism and National Socialism, Moishe Postone developed new thinking on modern anti-Semitism, and particularly on National Socialist ideology. Postone sees it as a major element in the development of a socio-historical theory of consciousness determined by social forms that are subjected to socialization under capitalism. What is said about modern anti-Semitism may also describe a trend of vulgar anti-capitalism that seeks the personification of the elements of capitalism that are so hated.

Postone shows that modern anti-Semitism is very different from most forms of racism and Christian anti-Semitism. It differs from them because it casts a huge global invisible power of international Jewery, it is the idea of a global conspiracy that is intrinsic to modern anti-Semitism. Postone analyzes anti-Semitism against the Marxian notion of dual character of the commodity category. And he observes that the characteristics that distinguishes anti-Semitism among the Jews are the same as for the value: abstraction, invisibility, automation, impersonal domination. Postone argues that the form of socialization under capitalism (the historically specific function of the spirit of labour under capitalism) makes it possible to separate the concrete (as socially “natural” sound, true, etc..).

This opposition between the concrete and the abstract determined by social forms, pervades all forms of subjectivity, and thus helps to understand a central feature of the National Socialist ideology. Because this ideology was not fundamentally anti-modern and it would be wrong to label it as such. It is true that claimed the defense of the peasantry and craftsmanship, but also said the modern technological and industrial production. Nazism was rather a vulgar form of anti-capitalism. The rejection of the bourgeoisie and its values is present in Nazism. There is more sense to see the Nazi ideology as the affirmation of the concrete dimension – which includes technology and industrial production, as well as the peasantry and manual labor – as heart healthy social life, organic, and it against the abstract dimension materialized by finance capital. The abstract is instead rejected – and it is personified by the Jews. Postone analyzes the figure of the Jew in the modern anti-Semitism as the embodiment of abstract value and extermination camps can be interpreted as a misbegotten notion of a “factory” to destroy value.