An airport is a funny thing, one that gives you access to other places but is not much of a place itself. But its underlying character has changed dramatically in the last few decades. If the glamour and hope of flying off for a visit or a new life still cling to the terminals, the airport has become a hub for the workaday circulation of goods at a global level.

This has been peculiarly true since the global downturn of manufacturing in the seventies. In April 1973, Federal Express delivered its first package; four decades later, FedEx has the fourth-largest fleet in existence. By freight it is the biggest airline in the world. At Oakland International, my local airport, the FedEx hangar and logistics hub crouches independent of the two modest passenger terminals, a behemoth with the gravity of a planet. It’s their world; we’re just living in it.

This transformation has happened behind the back of consciousness, and largely beyond our descriptions of the political situation. It would be hard to say it played a role in the protests of Saturday night. The narrative drama of airports — from Tom Hanks vehicle The Terminal to the flight of Edward Snowden — is about those who can’t leave or can’t arrive, and so end up trapped in this metaplace, separated out from life. It is funny or strange or exciting. Except of course behind all of these it is surely terrifying being seized by uniformed thugs, thrown in a room, at the mercy not of fate but arbitrary laws and state power.

END_OF_DOCUMENT_TOKEN_TO_BE_REPLACED

Survival of the Richest

Some of the wealthiest people in America—in Silicon Valley, New York, and beyond—are getting ready for the crackup of civilization. 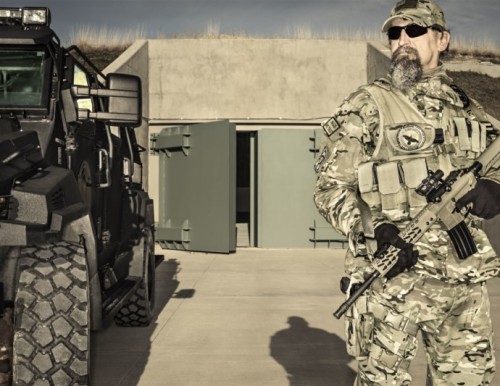 An armed guard stands at the entrance of the Survival Condo Project, a former missile silo north of Wichita, Kansas, that has been converted into luxury apartments for people worried about the crackup of civilization. Photograph by Dan Winters for The New Yorker

Steve Huffman, the thirty-three-year-old co-founder and C.E.O. of Reddit, which is valued at six hundred million dollars, was nearsighted until November, 2015, when he arranged to have laser eye surgery. He underwent the procedure not for the sake of convenience or appearance but, rather, for a reason he doesn’t usually talk much about: he hopes that it will improve his odds of surviving a disaster, whether natural or man-made. “If the world ends—and not even if the world ends, but if we have trouble—getting contacts or glasses is going to be a huge pain in the ass,” he told me recently. “Without them, I’m fucked.”

Huffman, who lives in San Francisco, has large blue eyes, thick, sandy hair, and an air of restless curiosity; at the University of Virginia, he was a competitive ballroom dancer, who hacked his roommate’s Web site as a prank. He is less focussed on a specific threat—a quake on the San Andreas, a pandemic, a dirty bomb—than he is on the aftermath, “the temporary collapse of our government and structures,” as he puts it. “I own a couple of motorcycles. I have a bunch of guns and ammo. Food. I figure that, with that, I can hole up in my house for some amount of time.”

Survivalism, the practice of preparing for a crackup of civilization, tends to evoke a certain picture: the woodsman in the tinfoil hat, the hysteric with the hoard of beans, the religious doomsayer. But in recent years survivalism has expanded to more affluent quarters, taking root in Silicon Valley and New York City, among technology executives, hedge-fund managers, and others in their economic cohort.

END_OF_DOCUMENT_TOKEN_TO_BE_REPLACED

Among other things, whiteness is a kind of solipsism. From right to left, whites consistently and successfully reroute every political discussion to their identity…[read more] 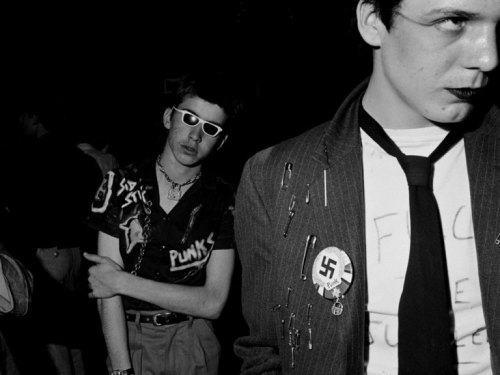 If you had read in early 2016 about a National Policy Institute conference on the theme of “Identity Politics,” you might have assumed it was an innocent gathering of progressives. If you had attended, you would have been in for an unpleasant surprise. The National Policy Institute is an organization of white nationalists, overseen by neo-Nazi media darling Richard Spencer…[read more]

END_OF_DOCUMENT_TOKEN_TO_BE_REPLACED

In one of the key scenes in Alfonso Cuarón’s 2006 film Children of Men, Clive Owen’s character, Theo, visits a friend at Battersea Power Station, which is now some combination of government building and private collection. Cultural treasures – Michelangelo’s David, Picasso’s Guernica, Pink Floyd’s inflatable pig – are preserved in a building that is itself a refurbished heritage artifact. This is our only glimpse into the lives of the elite, holed up against the effects of a catastrophe which has caused mass sterility: no children have been born for a generation.

Theo asks the question, ‘how all this can matter if there will be no-one to see it?’ The alibi can no longer be future generations, since there will be none. The response is nihilistic hedonism:

‘I try not to think about it’.

END_OF_DOCUMENT_TOKEN_TO_BE_REPLACED

In her much-heralded Brexit speech today, UK Prime Minister Theresa May continued to adopt the pose of the strict headmistress delivering an address on the school’s achievements. She attempted to be bold and proud, but avoided mentioning that no prizes have been won this year and the school trip abroad is now cancelled owing to insufficient funds. The speech was long on rhetorical cliché, yet short on detail that could not have been deduced from what has already been reported. However, there was a clear statement that the UK would not aim to stay in the EU single market after Brexit and, more interestingly, another implicit threat to the EU on what would happen if there were no good deal for the UK in the forthcoming negotiations.

END_OF_DOCUMENT_TOKEN_TO_BE_REPLACED

Sherlock Holmes and the Case of Karl Marx

Sherlock Holmes has had many strange requests, but none are so strange as the request from a certain Mr Karl Marx to help him find his stolen revolutionary tract `Das Kapital’.

A Capital Case – Karl Marx Meets Sherlock Holmes is a radio play by David Zane Mairowitz. It was first broadcast on BBC Radio 4 on 16 February 2001, as an installment of the Friday Play.

Workers of the World, Fight Amongst Yourselves!

Notes on the Refugee Crisis

by Friends of the Classless Society via Endnotes

The following text, by the Freundinnen und Freunden der klassenlosen Gesellschaft, was published in the October and November issues of the German leftist magazine Konkret. Translated here by Endnotes.

Last fall it appeared as if we were witnessing a political turning point. A mass movement of migrants showed fortress Europe the limits of its reach. This was, however, only a movement in the literal sense of the word and certainly not the awakening of a “multitude” shaking the foundations of the prevailing order. Migrants had no demands beyond the right to remain in Europe, a right which they had already temporarily asserted. In Germany, as the state failed to mobilize adequate resources, the logistics involved with the arrival of refugees were mostly left to volunteers. Meanwhile, the radical left took to celebrating the collapse of the European border regime as an act of “self-empowerment” or as “autonomy of migration”.

Others spied a sinister capitalist master plan behind Angela Merkel’s temporary open border policy. According to this interpretation, the policy sought to use cheap, docile immigrants to restructure the European labour market. Some on the left viewed this as a threat and have therefore joined calls for the erection of walls around Europe. They were further emboldened by the mass sexual assaults on New Year’s Eve in Cologne, in which hundreds of women were groped, robbed, and, in a few cases, raped by a large group of men of “Arab or North African appearance”. In light of the EU’s deal with Turkey and the internment camps currently being planned for Libya, both of these interpretations look dubious. After being taken by surprise, the powers that be have regained control of the situation and their need for cheap labour seems rather limited. On the contrary, the events of the past year reflect an overwhelming surplus of labour power, both in the countries of origin and in Europe. This surplus intensifies competition within the working class, breeding nativism, division and fear of poverty. If we are to understand this situation, we need to do more than decry racism.

END_OF_DOCUMENT_TOKEN_TO_BE_REPLACED

With What Must a Journal That Will Not Be Read Begin?

Cured Quail is a journal of critical theory that takes seriously the aesthetic, social and conceptual problems of literacy. By literacy we don’t mean simply the ability to read and write. Rather, Cured Quail poses the question of illiteracy as a historically specific hindrance to fully experiencing the words on a page, the patience of an idea, or the particulars of a work of art. Cured Quail is concerned with discussions on culture, philosophy, political economy and modern and contemporary art, featuring critical essays, reviews, polemics, interviews, and other formats.

However, as our commencing editorial describes, the redundancy of already existing publications devoted to the nomenclature society-art-culture presents us with a challenge; foremost derived from the experiential chasm nourished by the refreshing content of curated feeds that in its rapid-fire shots of interest prepares any but the most recondite reader for a diet of distraction.

We thereby ask ourselves: what does it take to be convincingly exceptional? While shouting toward a mural depicting a cave we’d like to assure the potential reader we haven’t expected an echo. This suits the editorial board of Cured Quail and the crux from which we will write and our writers will write, and from which we now entreat your support for the necessary funding to print our inaugural volume.

For the thought and readership of Cured Quail—like everything else today—money stands as the transcendental condition for the possibility of experience. Your support will help finance a first run of Cured Quail Volume 1.   Contribute here through KICKSTARTER

END_OF_DOCUMENT_TOKEN_TO_BE_REPLACED

The Age of Humanism is Ending

Under Israeli occupation for decades, Gaza will still be the biggest open prison on Earth.

In the United States, the killing of black people at the hands of the police will proceed unabated and hundreds of thousands more will join those already housed in the prison-industrial complex that came on the heels of plantation slavery and Jim Crow laws.

Europe will continue its slow descent into liberal authoritarianism or what cultural theorist Stuart Hall called authoritarian populism. Despite complex agreements reached at international forums, the ecological destruction of the Earth will continue and the war on terror will increasingly morph into a war of extermination between various forms of nihilism.

The denigration of virtues such as care, compassion and kindness will go hand in hand with the belief, especially among the poor, that winning is all that matters and who wins — by whatever means necessary — is ultimately right.

With the triumph of this neo-Darwinian approach to history-making, apartheid under various guises will be restored as the new old norm. Its restoration will pave the way to new separatist impulses, the erection of more walls, the militarisation of more borders, deadly forms of policing, more asymmetrical wars, splitting alliances and countless internal divisions including in established democracies.

None of the above is accidental. If anything, it is a symptom of structural shifts, which will become ever more apparent as the new century unfolds. The world as we knew it since the end of World War II, the long years of decolonisation, the Cold War and the defeat of communism has ended.

END_OF_DOCUMENT_TOKEN_TO_BE_REPLACED

The past grows gradually around one, like a placenta for dying.