A Happy Future is a Thing of the Past 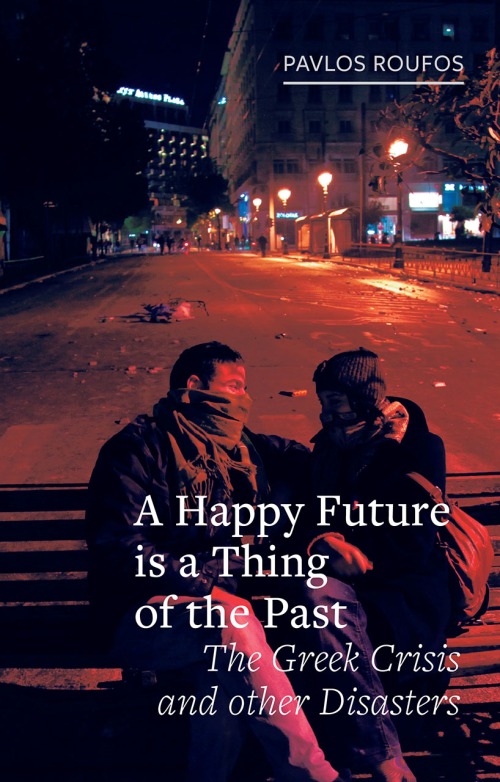 The Greek Crisis and Other Disasters by Pavlos Roufos  (2018)

The movement that began in Syntagma Square in late May 2011 and very soon spread out to squares all over Greece (thus gaining the nickname ‘squares movement’), represented one of the most condensed moments of the struggle against the crisis, its consequences and management. Many have argued that it did not have a specific aim or demand; according to one’s politics, this observation had either a negative or a positive undertone. However, there can be no doubt whatsoever that the masses that took to the streets, occupied public spaces and fought for almost two months to defend them, were directly concerned with putting an end to the austerity policies that were underway. And these policies, as we have seen, were nothing but a systematic attempt to render people’s ability to survive in a way that was meaningful to them increasingly difficult.

Despite the fact that the first call to gather at Syntagma Square came from an unknown Facebook account, 30,000 people showed up on the first night. Within one week, the number would exceed 200,000. Contrary to the tense moments of strikes and demonstrations, the crowds at Syntagma spent the first few days starting up conversations, debating burning topics, exchanging life stories. The atmosphere was one of enthusiasm, surprise and hyped expectations. As political organizations and other institutions were busy trying to decode and categorize the meaning of this novelty, people enjoyed the moments away from wannabe leaders and arrogant experts, eager to discover in each other the potential for disrupting a process that had disrupted their lives. Contrary to most descriptions, usually from people who were not there, Syntagma Square had no clear dividing lines (such as the infamous top and bottom square divide): as at any festival or large social gathering, people moved interchangeably from one spot to another, savouring their friends’ company, meeting new people, flirting insatiably, taking part in the assembly or having a laugh at parliament and its guards.

Perhaps due to this joyous context, the people in the square had no trouble in identifying their enemies: politicians and political parties that were displaying their commitment to austerity; smaller political parties, groups and organizations that, just like advertising agencies, were, above all, concerned with attracting new customers for their commodity/ideology; the mass media, whose aim was to present (and consolidate) austerity as necessary; the bosses, whose pursuit of profit made them more than willing to celebrate the restructuring process as a means of further reducing labour costs; the trade unions, identified as being the mediation between capital and labour power on the side of capital and its political representatives. On top of that, the Syntagma occupation was, from its inception, a place where racism and the xenophobic sentiments that had forcefully appeared shortly before were not tolerated.

What is particularly of interest in relation to the Syntagma movement was that large parts of the established Left, its various groupuscules and even some more radical corners exclaimed an immediate negative reaction to its outbreak that could also be described as Pavlovian. For some, this was somewhat understandable: left-wing groupings that can only sustain any sense of coherence by force-feeding their identity on others (selling papers, collecting signatures, waving their distinguishable flags and memorabilia) were either ignored or forced to leave. In fact, it was mostly those of the established Left who saw in this movement a chance for increasing their voters’ clientele and were strategic enough to hide their political membership, such as Syriza members, who remained there. As far as the more radical milieu was concerned, their reaction can only be explained as the concentrated result of years of marginalization or isolation and echo-chamber comfort.

In their case, the creation of an identity of radicalism by way of excluding the ‘reformist’ or ‘passive’ majority rendered them incapable of understanding that their abstract propagation of social uprisings or even revolution necessitates an interaction and co-existence with this very majority and all its contradictions. This is precisely the difference between a political movement (one that is created and sustained through a network of shared political ideas) and a social movement (one that brings people together on the basis of their social position and not their  ideology or morals). To the extent that the austerity measures were directly attacking people’s social existence as proletarians or proletarianized, the Syntagma mobilization was a formidable opportunity to engage in and explore the potentials and limitations of class antagonism in Greek society as it is and not as people would like or imagine it to be. However likely it might have been that these struggles would be riddled with contradictions and problems, this is not a matter of choice. A leap into the open air of history is not accompanied by invitations for ‘friends/comrades-only’. Rather, it is only through direct engagement that a movement’s contra- dictions and even reactionary tendencies could be identified and fought against; and it was only by trying to be clear and honest about its content and character that its real limitations and potentials could be explored.25 At the end of the day, presenting the squares movement as something that it was not has essentially mystified its eventual failure to prevent austerity and this is, among other things, a heavy burden for future movements.

It has been a monotonous battle cry of the established Left of the last decades to proclaim their indignation against what they term the ‘disappearance of politics’. Taking a cue from the portrayal of ‘neoliberalism’ as the process of the domination of technocratic and ruthless market forces against ‘democratic procedures’, the Left has consistently proclaimed the erosion of democracy as one of the fundamental problems of our times. In this respect, it came as no surprise that many of the Left who participated in the squares movement were shocked (or even disgusted) at the anti-political tendencies present.

One does not need to be a particularly acute observer, however, to draw the obvious conclusion that when the Left speaks of struggles, its primary concern is how to put itself in a position to lead and control them. For such a mediation to be effective, the necessity of political separation is crucial: in other words, the necessity of recognizing the importance of experts, intellectuals, leaders or the fetish of organization. It is true that, as of late, a certain ‘horizontal’ structure is proclaimed by many to be the preferable configuration, but the lack of content of this catchphrase makes it a rather elusive category. In this context, the Left’s attitude towards the squares movement was not merely the result of their self-important preoccupations. It was, at the same time, the direct result of the extensive damage that had been inflicted on politics during the crisis, the obvious delegitimization of common political processes. Thus, and while many on the Left applauded the denunciation of the official political class, the mass media and, obviously with less vigour, the trade unions, they shivered when confronted with an understanding that this rejection also included them. Thus when the popular assembly of Syntagma included suggestions such as excluding national symbols, flags, political parties and organizations, many organized political activists felt – rightly so – that their role was being undermined.

Left-wing parties or organizations have certain advantages during social explosions. They have better access to infrastructural resources (money for posters, megaphone installations, computers), as well as a steady supply of members whose function is to promote a specific party line in a condensed and calculated manner, hoping to exert enough influence and direct popular anger towards their own ends, usually parliamentary. But social uprisings are not merely technical matters: having control of the megaphones or producing tonnes of banners and posters does not, in itself, change a given social dynamic, nor can it easily distract people from the real reasons that bring them to the streets. In Syntagma’s context, the attempts of the Left (and primarily Syriza) to take control of the narrative by dominating the assembly, or the smaller working groups, brought them up against not simply those who opposed their ideas politically but the fact that their approach and proposals appeared irrelevant to the practical necessities of the square. Thus while there is no doubt that Syriza members tried to control discussions during the assemblies by positioning themselves in key positions of the ‘organizing committee’, they were hardly as successful as people have claimed in retrospect.

It was not only the fact that some of their members were not yet particularly experienced manipulators that proved an obstacle to their goals; more often it was, in fact, the honest portrayal of their vision that alienated people. For example, Syriza members tried to set the tone of the political discussions in the square by organizing one of the most boring events in the square’s history: not only was the setting itself in sharp contrast to the usual atmosphere of the square (using a large table for the expert speakers, and chairs for the audience, they reproduced the formal structure of a lecture), but the speakers, apparently convinced they were speaking to idiots, spurted out endless banalities for hours. The official purpose of this grandiose production was to act as the starting point for a campaign that would declare part of the public debt as odious and therefore refrain from paying it, a vision close to Syriza’s aspirations but mostly irrelevant to those who participated in the mobilizations. Though the event was tolerated, in the same way that Syriza was tolerated, it hardly influenced any debates.

Nonetheless, while the immediate instincts of participants in Syntagma worked against recuperative attempts, a major limit of the squares mobilization was that its anti-political form did not generate a similar content. Politics, as a separate and separating sphere of activity, is not only to be found in parliament and/or the official organizations and groupings of the Left. It is, above all, a structurally embedded belief in a certain process, historically grounded on existing social relations. Thus, and though the squares movement included the formal rejection of political processes (opting for ‘direct democracy’, another fashionable phrase empty of real content), it had nothing to say against informal processes. The rejection of traditional political practices was thus replaced by a fetishism of procedure, whose aspiration to radicalism was confined to the promise that all voices would be heard. As a result, while rightfully rejecting the lectures of ‘experts’, the square ended up pointlessly glorifying the monologues of ‘non-experts’. The ensuing ‘succession of monologues’ might have been inspiring in its rejection of the usual, hopelessly gendered, professionalism that one comes across in these cases, but it ended up being a barrier to the practical necessities of the movement, as it became increasingly difficult to reach any decision that could act as a real barrier to the ongoing austerity. What remained was the illusion that words (whether angry, confused or heartfelt) could play a role in halting a process of economic restructuring.

The helplessness felt vis-à-vis the implementation of austerity was eventually compensated by a fetishistic enthusiasm over ‘participation’. Claiming its rightful spot in the catalogue of meaningless catchphrases of our times, ‘participation’ is only capable of describing a ‘being-there’, while having nothing to say about the content of what one is doing. In the end, as is often the case with fetishism, the term came to mean its opposite: doing nothing while being there. Instead of using this truth (being there) as a starting point for specific actions, a large contingency of the movement felt it was enough to merely declare their presence and moral superiority over those who were deciding their fate in order for economic restructuring to stop. Not surprisingly, it did not.