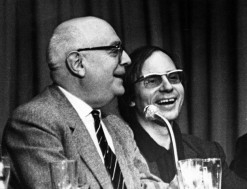 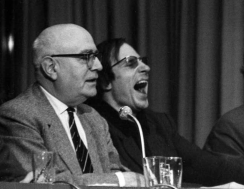 Adorno’s intellectual biography, even in its most aesthetic abstractions, is marked by the experience of Fascism. The mode in which this experience is reflected—by deciphering from the works of art the insoluble relation between critique and suffering—constitutes the uncompromising claim to negation, while simultaneously setting limits to it. “Damaged life,” through reflection on fascist domination as generated by the natural economic catastrophes of the capitalist mode of production, is aware of its entanglement in the ideological contradictions of bourgeois individualism, whose irrevocable decay it has understood; at the same time, it cannot disengage from it. Fascist terror produces not only the understanding of the hermetic compulsiveness of highly industrialized societies, it also violates the subjectivity of the theoretician and reinforces the class barriers against his cognitive ability. Adorno expresses this awareness of the process in his “Introduction” to Minima Moralia:

The powers that had driven me away also kept me from fully understanding them. I did not yet admit to myself my part in the conspiracy, which enmeshes everybody who even talks about individual matters while confronted by the unspeakable that is happening on a collective level.

It seems as if Adorno’s cutting critique on the ideological existence of the bourgeois individual irresistibly trapped him in its ruin. But this would mean that Adorno had never really left the isolation that emigration imposed on him. The monadic fate of the individual isolated by the laws of production of abstract labor is mirrored in his intellectual subjectivism. This is why Adorno was not able to translate his private compassion for the wretched of the earth into an integral partisanship of his theory towards the liberation of the oppressed.

Adorno’s socio-theoretical insight that the revival of National Socialism under democracy would have to be considered as potentially more dangerous than fascist tendencies against democracy turned his increasing fear of a fascist stabilization of monopoly capitalism into a regressive anxiety towards any form of active resistance against these very tendencies of the system.

He shared in the ambivalent political consciousness of many critical German intellectuals who project that left-wing socialist action would actually only trigger the potential of right-wing fascist terror which it fights. But consequently, any praxis is denounced a priori as blindly actionistic and the possibility of political critique as such is boycotted, i.e., critique that would distinguish between an essentially correct pre-revolutionary praxis and its infantile expressions in emerging revolutionary movements.

In contrast to the French proletariat and its political intellectuals, Germany lacks an unbroken tradition of militant resistance and thus the historical preconditions for a rational discussion of the historical legitimacy of militancy. The existing domination, which according to Adorno’s own analysis has pushed towards new fascist forms [Faschisierung] even after Auschwitz, could not be real, were the Marxist “weapon of critique” in need of no supplementary proletarian “critique of weapons.” Only then would critique be the theoretical life of the revolution.

This objective contradiction in Adorno’s theory pushed toward open conflict and turned the socialist students into political opponents of their philosophical teacher. Regardless of the extent to which Adorno saw through the bourgeois ideology of the value-free search for truth as a phenomenon of commodity exchange, he equally distrusted traces of politically-oriented struggle [Richtungskampf] in scientific dialogue.

But his critical option—that, in order to share in truth, thought would have to orient itself spontaneously towards practically changing social reality—loses its edge if it cannot define itself in terms of organizational categories as well. Adorno’s dialectical concept of negation moved further and further away from the historical necessity of an objective partisanship of thought, which was present in Horkheimer’s specific determination of the difference between critical and traditional theory, at least in his advocating the “dynamic unity” of the theoretician and the dominated class.

Abstracting from these criteria ultimately drove Adorno in his conflict with the student movement into a fatal complicity—which even he scarcely understood—with the ruling powers. The problem of private abstinence from praxis was in no way the only issue involved in the controversy, but Adorno’s inability to confront the problem of organization points to an objective inadequacy in his theory, which nevertheless assumes social praxis as a central category in epistemology and social theory.

And yet it was Adorno’s thought that communicated to the politically conscious students the emancipatory categories which unveil domination and inexpressibly [unausdrücklich] correspond to the changed historical conditions of revolution in the cities —conditions no longer determinable by unmediated prejudiced experiences.

Adorno’s power of presentation on the micro-level unearthed from the dialectic of commodity production and exchange value the buried emancipatory categories of Marx’s critique of political economy, whose power as a revolutionary theory—i.e., a theory that states the construction of society in the perspective of radical change—has mostly been forgotten by contemporary Marxist economists. Adorno’s thought on the essential logic of the categories of reification and fetishization, of mystification and second nature carried on the emancipatory consciousness of Western Marxism of the twenties and thirties, of Korsch and Lukacs, Horkheimer and Marcuse, as it formed itself in opposition to official Soviet Marxism.

In his philosophical critique of the ideologies of fundamental-ontological being and of positivist factualism, Adorno deciphered origin and identity as the dominant category of the sphere of circulation, whose liberal legitimating dialectic of bourgeois morality—the appearance of fair exchange between equal owners of commodities—had dissolved long ago.

But the same theoretical tools which allowed Adorno this insight into the social totality, also prevented him from seeing the historical possibilities of a liberating praxis.

In his ideology critique on the death of the bourgeois individual, there are after-tremors of justified sadness. But in his thinking, Adorno could not immanently (in the Hegelian sense of the term) transcend this radicalized last bourgeois stance. He remained transfixed by it, with a fearful glance at the terrible past —the consciousness that always comes too late to someone who only begins to understand at dusk.

Adorno’s negation of late capitalist society has remained abstract, closing itself to the need for the specificity of specific negation, i.e., the dialectical category to which he knew himself obligated by the tradition of Hegel and Marx. In his last work, Negative Dialectics, the concept of praxis is no longer questioned in terms of social change in its specific historical forms, i.e., the forms of bourgeois relations and proletarian organization. The withering of the class struggle is mirrored in his critical theory as the degeneration of the materialist conception of history.

Even so, at one time it was programmatic for Horkheimer to attribute theory to the liberating praxis of the proletariat, but the bourgeois organizational form of Critical Theory even then could not establish congruence between the program and its realization. The fact that the workers’ movement, first smashed by fascism, then apparently irrevocably integrated by the reconstruction of West German post-war capitalism, changed the meaning of the concepts in Critical Theory. They necessarily had to lose specificity, but this process of abstraction occurred blindly.

Heidegger’s historicism as “the ahistoric concept of history” was critically challenged by Adorno’s concrete and material history, which, however, faded more and more from his concept of social praxis; in his last work, Negative Dialectics, it has evaporated to the point that it appears assimilated into the transcendental poverty of Heidegger’s category.

To be sure, in his address to the German Sociological Society, Adorno correctly and emphatically insisted on the relevance of orthodox Marxism: the industrial forces of production are still organized according to capitalist relations of production, and political domination, then and now, is based on the economic exploitation of wage laborers. But regardless of the extent to which his orthodoxy conflicted with official West German sociology, it had to be inconsequential, since the categorial forms were not related to concrete history.

This progressive process of abstraction from historical process has transformed Adorno’s Critical Theory back to the contemplative and scarcely legitimate forms of traditional theory.

The traditionalization of his thinking makes his theory the voice of reason grown old in history. On the level of his thinking, the materialist dialectic of the chained forces of production are reflected in the concept of a theory in its own chains, inescapably enmeshed in the immanence of its concepts. “If the time for interpreting the world is over, and it becomes necessary to change it, then philosophy takes leave… it is time not for the First Philosophy, but for the last.” This last philosophy of Adorno has been neither willing nor able to take leave of its own departure.

One Comment to “The Political Contradictions in Adorno’s Theory (Krahl, 1971)”