Collection of essays on housing and the built environment from 20th century British anarchist and town planner, Colin Ward. First published by Freedom Press 1976 in London.

Colin Ward is well-known as an authority on housing and as an anarchist propagandist. How do these two themes combine? This book brings together articles and addresses covering thirty years of advocacy of an anarchist approach to housing.

DIRECT ACTION, the first section, includes his now classic account of the post-war squatters’ movement and relates it to the current signifancace of the squatters in Britain and elsewhere.

HUMAN NEEDS identifies the missing component in public housing policies: dweller involvement; and anticipates today’s anxieties about the social effects of imposing official policies on people whose own perception of their housing needs has been systematically ignored.

SELF HELP includes account of do-it-yourself housing in Britain and abroad, the remarkable achievements of the squatter settlements in the ‘cities the poor build’ in the Third World sketches the outlines of an anarchist approach to the city.

PROFESSIONALS OR PEOPLE? is the question raised in the fourth section of this book. What went wrong with architecture and planning? Can we transform them from being the concern of a bureaucratic elite into a populist and popular activity?

DWELLER CONTROL argues that the only future for the public housing, whether in our decaying cities or on new estates, is the tenant take-over. 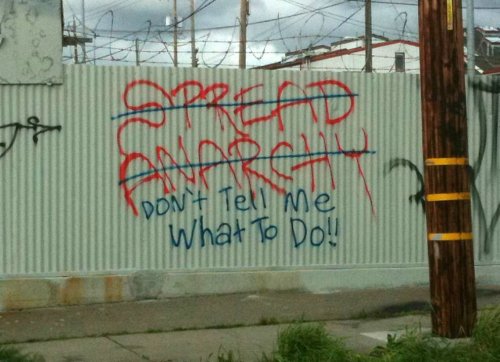 Simon Springer (2014) has written a lively and polemical piece in which he argues that a radical geography must be freshly anarchist and not tired-old Marxist. As with any polemic of this sort, his paper has its quota of misrepresentations, exaggerations and ad hominem criticisms, but Springer does raise key issues that are worthy of discussion.

Let me first make clear my own position. I sympathize (but don’t entirely agree) with Murray Bookchin, who in his late writings (after he had severed his long- standing connection to anarchism), felt that “the future of the Left, in the last analysis, depends upon its ability to accept what is valid in both Marxism and anarchism for the present time and for the future coming into view” (Bookchin, 2014: 194). We need to define “what approach can incorporate the best of the revolutionary tradition – Marxism and anarchism – in ways and forms that speak to the kinds of problems that face the present” (2014: 164).

Springer, judging from his piece, would want no part in such a project. He seems mainly bent on polarizing the relation between anarchism and Marxism as if they are mutually exclusive if not hostile. There is, in my view, no point in that. From my Marxist perspective, the autonomist and anarchist tactics and sentiments that have animated a great deal of political activism over the last few years (in movements like “Occupy”) have to be appreciated, analyzed and supported when appropriate. If I think that “Occupy” or what happened in Gezi Park and on the streets of Brazilian cities were progressive movements, and if they were animated in whole or in part by anarchist and autonomista thought and action, then why on earth would I not engage positively with them? To the degree that anarchists of one sort or another have raised important issues that are all too frequently ignored or dismissed as irrelevant in mainstream Marxism, so too I think dialogue – let us call it mutual aid – rather than confrontation between the two traditions is a far more fruitful way to go. Conversely, Marxism, for all its past faults, has a great deal that is crucial to offer to the anti-capitalist struggle in which many anarchists are also engaged.

Geographers have a very special and perhaps privileged niche from which to explore the possibility of collaborations and mutual aid. As Springer points out, some of the major figures in the nineteenth century anarchist tradition – most notably Kropotkin, Metchnikoff and Reclus – were geographers. Through the work of Patrick Geddes, Lewis Mumford and later on Murray Bookchin, anarchist sentiments have also been influential in urban planning, while many utopian schemas (such as that of Edward Bellamy) as well as practical plans (such as those of Ebenezer Howard) reflect anarchist influences. I would, incidentally, put my own utopian sketch (“Edilia”) from Spaces of Hope (2000) in that tradition.

Social anarchists have typically been much more interested in and sensitive to questions of space, place and environment (core concepts that I think most geographers would accept as central to their discipline). The Marxist tradition, on the whole, has been lamentably short on interest in such topics. It has also largely ignored urbanization and urban social movements, the production of space and uneven geographical developments (with some obvious exceptions such as Lefebvre and the Anglo-French International Journal of Urban and Regional Research that began in 1977, and in which Marxist sociologists played a prominent founding role). Only relatively recently (e.g. since the 1970s) has mainstream Marxism recognized environmental issues or urbanization and urban social movements as having fundamental significance within the contradictions of capital. Back in the 1960s, most orthodox Marxists regarded environmental issues as preoccupations of petite bourgeois romanticists (this was what infuriated Murray Bookchin who gave vent to his feelings in his widely circulated essay, “Listen, Marxist!”, from 1971’s Post- Scarcity Anarchism).

Shortly after I got interested in Marx and Marxism in the early 1970s, I figured that part of my mission might be to help Marxists be better geographers. I have frequently joked since that it proved much easier to bring Marxist perspectives into geography than to get Marxists to take geographical questions seriously. Bringing Marxist perspectives into geography meant taking up themes on space, place making and environment and embedding them in a broad understanding of “the laws of motion of capital” as Marx understood them. Most social anarchists I know (as Springer admits) find the Marxist critical exposé and theoretical account of how capital circulates and accumulates in space and time and through environmental transformations helpful. To the degree that I was able, and continue to work on, how to make Marx’s critique of capital more relevant and more easily understood, particularly in relation to topics such as urbanization, landscape formation, place- making, rental extractions, ecological transformations and uneven geographical developments, I would hope that social anarchists might appreciate and not disparage the effort. The contributions of Marxism in general and Marxist political economy in particular are foundational to anti-capitalist struggle. They define more clearly what the struggle has to be about and against and why.