For most of America’s history, one of the most righteous anti-white supremacist tactics available was looting.

As protests in Ferguson continued unabated one week after the police killing of Michael Brown, Jr., zones of Twitter and the left media predominantly sympathetic to the protesters began angrily criticizing looters. Some claimed that white protesters were the ones doing all of the looting and property destruction, while others worried about the stereotypical and damaging media representation that would emerge. It also seems that there were as many protesters (if not more) in the streets of Ferguson working to prevent looting as there were people going about it. While I disagree with this tactic, I understand that they acted out of care for the struggle, and I want to honor all the brave and inspiring actions they’ve taken over the last weeks.

END_OF_DOCUMENT_TOKEN_TO_BE_REPLACED

Notes from the Anthropocene #1:

On September 21, 2014, nearly 400,000 people took part in the People’s Climate March and Mobilization, winding their way from Central Park through Midtown Manhattan and ending with a block party celebration on the city’s mostly empty West Side (flooded during Sandy). Cleanly subdivided into six categories of political subjects—indigenous and environmental justice groups up front, a medieval combination of scientists and priests in the fifth, and finally “Here comes everybody! L.G.B.T.Q., N.Y.C. Boroughs, Community Groups, Neighborhoods, Cities, States, and more” in the sixth—the march called on the United Nations Climate Summit and governments around the world to steer a course towards appropriate “climate action” and “climate justice” on behalf of the groups neatly represented like meats and cheeses on a Hormel party tray. The following day, former anti-globalization and Occupy Wall Street activists, many on the payroll of this or that N.G.O., attempted a mass civil disobedience action on the blocks leading to the New York Stock Exchange. When the orchestrated non-violence of Flood Wall Street met the orchestrated non-brutality of the NYPD, ne’er an arrest occurred and the organizers called it all off, going home and turning the streets over to a few hundred unofficial protesters who were determined to be peacefully taken into custody.

As the United Nations met later that week to talk about talking about limiting global temperature rise to less than 3.6 degrees Fahrenheit (2 degrees Celsius) through a reduction in carbon emissions while simultaneously making economies, cities, and networks resilient, the People’s Climate Summit website released its own numbers: 400,000 people, 1,574 organizations, 50,000 college students, 5,200 articles, and 7 celebrity selfies. Homemade and mass-produced signs, puppets and inflatables, polar bear costumes and globes, thousands of buses whose bills were footed by non-profits and Gofundme.com, a pony-tailed Leo DiCaprio parading around as the U.N.’s Messenger for Peace, with a special focus on climate change issues. A success, they say, in launching the climate justice movement, a success as quantifiable as the parts per million of the upper safety limit for the atmosphere. As the march quickly faded into most New Yorkers’ memories, as when a million of us marched against the war that happened anyway, a variety of non-questions circulated to try to cement the march’s legacy. Was it too radical? Not radical enough? Too little too late? A photo-op? A corporate greenwash with the help of the “non-profit industrial complex”? 1 Non-questions for a non-world. Simply put, the Climate March was a blast from the past, mobilizing a set of political techniques and priorities that have literally been left behind by reality, by the new common in which we find ourselves.

A new epoch is certainly at hand; one need only trace the fault lines from the glacial barricades of Kiev’s Maidan across the radioactive swamp left by Fukushima’s failing ice wall to the “Winter is Coming” graffiti of Istanbul’s Gezi commune. Everywhere this age speaks its exhaustion, in the massive human efforts to break through and in the falling of idols. The once coherent subject around which the world was ordered stands in ruin as a neurotic information node whose closest relationship is with a cellphone or iPad. The claims to mastery over the world are being literally washed away by rising seas, while terminal diagnoses of our civilization proliferate as quickly as fantasies of the end (see the Walking Dead’s Terminus). As Brad Evans and Julien Reid describe it in their book Resilient Life, “We are living out the final scenes of the liberal nightmare in all its catastrophic permutations,” an epoch that is sensed just as much in the collapse of the Western Antarctic ice sheet2 and the bamboo barricades of Hong Kong as in the desertification of the Amazon rainforest and the death vows of the Lakota in the face of the KeystoneXL pipeline.3 Some people say the world is ending, but we say it is just a way of life, a certain order of things.

END_OF_DOCUMENT_TOKEN_TO_BE_REPLACED

Fire to the Prisons

This is for the world’s exploited and dominated groups or classes. It is for the uncomfortable, the miserable, the disempowered, or the lost. It is also for the uncontrollable, empowered, fed up, and criminalized. It is a reminder for those living in conflict every day with the social order that reigns upon the earth, that they are not alone.

New Pussy Riot song & music video on police brutality and the death of Eric Garner who was killed by NYC Police.

To All Those Who Can’t Breathe

Beauty is in the street 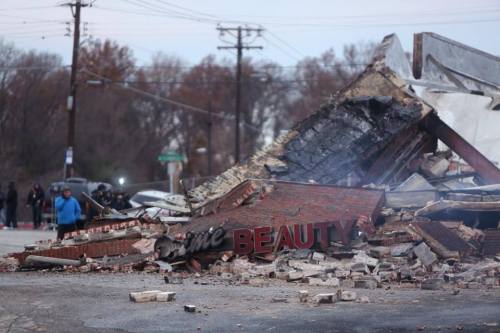 “What is going on here is real simple,” said D.R.A, 18, who was with his two younger sisters. “We told them no justice, no peace. We didn’t get our justice, so they don’t get their peace. We’re fucking shit up over here. Plain and simple.”

“20 photos that show exactly what happened last night in ferguson”

Video of Oakland from Global Uprisings

Why we won’t wait

In defense of Looting

In defense of the Ferguson Riots

Article in “Time” Magazine (!) defending the riots –  “The violent protests in Ferguson, Mo., are part of the American experience. Peaceful protesting is a luxury only available to those safely in mainstream culture”

Inextinguishable Fire: Ferguson and Beyond

The cop murder of Mike Brown and the subsequent eruption in Ferguson and around the US have raised questions about the value of racialised life and the forms of struggle against race emerging in the face of displacement, immiseration and militarised policing. R.L. traces the coordinates of a militant younger generation that has a different relation to race and class belonging

We are ready to die tonight

We still live in the shadows of the global financial crisis. Now seemingly a distant memory – along with the wave of struggles that trailed in its tracks – the full ramifications of the crisis are still unfolding today. Sluggish worldwide GDP growth rates, high unemployment levels, diffuse immiseration amongst the population…all the while governments bear a purely negative function, engaging in a hodgepodge of ineffective half-measures intended to prevent further social dissolution. In this regard, we very much agree with Endnotes’ analysis of the present as caught in a holding pattern, in which the global crisis of capital has for the moment stalled and the forces of disintegration are kept at bay.[1]

Within the constraints of these circumstances, a growing mass of humanity are being left behind as the economy falters ahead. In order for capitalist society to continue its course, the growing mass of surplus humanity must somehow be ‘integrated’ into class society even despite being socially ‘unnecessary’ to its reproduction. In the absence of any wider social resolution to growing immiseration, the predicament is for now resolved ideologically through criminalisation and practically through punishment. Increasing immiseration, and subsequently exclusion, must therefore be justified and normalised. Rising social inequality becomes framed as a problem of containment and the solution one of increasing control.

The police shooting of Michael Brown resonates all too familiarly within this interim period. However, in contrast to other similar incidences, Ferguson has led to an especially explosive and protracted reaction. Its impact has gone far beyond the small suburb of Ferguson, Missouri, attracting not only those in the immediate vicinity of the town itself, but reverberating all throughout the United States. What factors have made the rebellion in Ferguson particularly extensive? Does the eruption indicate any evolutionary development in the problem of coordination amongst proletarians in light of past struggles? And what does this eruption tell us about our place within the ongoing crisis of the capitalist class relation?