The so-called second generation of Frankfurt critical theorists, Jürgen Habermas and Claus Offe, had formulated social-democratic theories of the state. They had argued that capitalism’s crisis tendencies had been overcome and that the working class had been integrated into contemporary society. All struggles were thus political struggles over the state’s management of economic relations, and social democracy represented the road to human fulfilment.

Johannes Agnoli had critiqued Habermas and Offe’s theories. For Agnoli the state was the political form of capitalist reproduction, not something to be understood as separate from economic relations. Keynesianism, moreover, had not overcome class struggle, but rather “statified” it by incorporating the working class into a vast bureaucracy. All struggles should thus be outside of and against the state in order to abolish it outright, and with it the whole of capitalist society.

END_OF_DOCUMENT_TOKEN_TO_BE_REPLACED 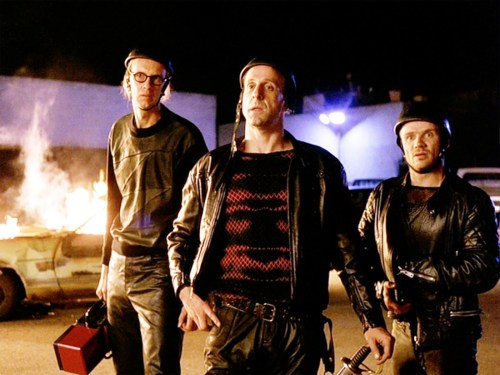 It feels increasingly difficult to tell the difference between—on one hand—being old, sick, and defeated, and—on the other hand—living in a time-&-place that is itself senile, tired, and defeated. Sometimes I think it’s just me—but then I find that some younger, healthier people seem to be undergoing similar sensations of ennui, despair, and impotent anger. Maybe it’s not just me.

A friend of mine attributed the turn to disillusion with “everything”, including old-fashioned radical/activist positions, to disappointment over the present political regime in the US, which was somehow expected to usher in a turn away from the reactionary decades since the 1980s, or even a “progress” toward some sort of democratic socialism. Although I myself didn’t share this optimism (I always assume that anyone who even wants to be President of the US must be a psychopathic murderer) I can see that “youth” suffered a powerful disillusionment at the utter failure of Liberalism to turn the tide against Capitalism Triumphalism. The disillusion gave rise to OCCUPY and the failure of OCCUPY led to a move toward sheer negation.

However I think this merely political analysis of the “new nothing” may be too two-dimensional to do justice to the extent to which all hope of “change” has died under Kognitive Kapital and the technopathocracy. Despite my remnant hippy flower- power sentiments I too feel this “terminal” condition (as Nietzsche called it), which I express by saying, only half- jokingly, that we have at last reached the Future, and that the truly horrible truth of the End of the World is that it doesn’t end.

END_OF_DOCUMENT_TOKEN_TO_BE_REPLACED

4chan: The Skeleton Key to the Rise of Trump

Trump’s younger supporters know he’s an incompetent joke; in fact, that’s why they support him.

1. Born from Something Awful

Around 2005 or so a strange link started showing up in my old webcomic’s referral logs. This new site I didn’t understand. It was a bulletin board, but its system of navigation was opaque. Counter intuitively, you had to hit “reply” to read a thread. Moreover, the content was bizarre nonsense.

The site, if you hadn’t guessed, was 4chan.org. It was an offshoot of a different message board which I also knew from my referral logs, “Something Awful”, at the time, an online community of a few hundred nerds who liked comics, video games, and well, nerds things. But unlike boards with similar content, Something Awful skewed toward dark jokes. I had an account at Something Awful, which I used sometimes to post in threads about my comic.

4chan had been created by a 15 year old Something Awful user named Christopher Poole (whose 4chan mod name was “m00t”). Poole had adapted a type of Japanese bulletin board software which was difficult to understand at first, but once learned, was far more fun to post in than the traditional American format used by S.A., as a result the site became popular very quickly.

These days, 4chan appears in the news almost weekly. This past week, there were riots at Berkeley in the wake of the scheduled lecture by their most prominent supporter, Milo Yiannopoulos. The week before that neo-Nazi Richard Spencer pointed to his 4chan inspired Pepe the Frog pin, about to explain the significance when an anti-fascist protester punched him in the face. The week before that, 4chan claimed (falsely) it had fabricated the so called Trump “Kompromat”. And the week before that, in the wake of the fire at Ghost Ship, 4chan decided to make war on “liberal safe spaces” and DIY venues across the country.

How did we get here? What is 4chan exactly? And how did a website about anime become the avant garde of the far right? Mixed up with fascist movements, international intrigue, and Trump iconography? How do we interpret it all?

END_OF_DOCUMENT_TOKEN_TO_BE_REPLACED

Why do leftists move to the right?

Political conversions are painful, like losing your religion or falling out of love.

The biggest story of the past fifty years in American politics has been the ascendancy of the right, and it’s a story of apostasy. At each stage of the conservative movement’s long march to power, crucial aid was provided by heretics from the left. Progressives recoiled from the New Deal and turned reactionary; ex-Communists helped to launch National Review, in the nineteen-fifties; recovering socialists founded neoconservatism in the sixties and seventies; New Left radicals turned on their former comrades and former selves in the Reagan years. Ronald Reagan, whose Presidency brought the movement to its high-water mark, was himself once a New Deal liberal. In the course of a lifetime, the prevailing political winds are westerly—they blow from left to right. Try to think of public figures who made the opposite journey: Elizabeth Warren, Garry Wills, and Joan Didion come to mind, and Kevin Phillips, the disillusioned Nixon strategist; more recently, the writer Michael Lind and the Clinton-hater-turned-lover David Brock defected from the right to the left. That’s about it.

The most common explanation is the one variously attributed to Churchill, Clemenceau, and Lloyd George: “Any man who is not a socialist at age twenty has no heart. Any man who is still a socialist at age forty has no head.” The move rightward is thus a sign of the hard wisdom that comes with age and experience—or, perhaps, the callousness and curdled dreams that accompany stability and success. Irving Kristol, the ex-Trotskyist who became the godfather of neoconservatism, quipped that a neoconservative was “a liberal who has been mugged by reality.” Most people are hardly aware of the shift until it’s exposed by a crisis, like a major political realignment that forces us to cross party lines. Even then, they want to believe that it’s the politics, not themselves, that changed. My maternal grandfather, George Huddleston, an Alabama congressman in the early decades of the twentieth century, began his career voting with the only Socialist in Congress and ended as a bitter opponent of what he saw as the federal overreach of the New Deal. In 1935, on the floor of the House, a Democratic colleague mocked him for reversing his position on public ownership of electric power. Fuming, Huddleston insisted, “My principles and myself remain unchanged—it is the definition of ‘liberalism’ which has been changed.” Or, as Reagan famously (and falsely) claimed, he didn’t leave the Democratic Party—the Democratic Party left him.

It’s like blaming your spouse for your own unfaithfulness. Political conversions are painful affairs, as hard to face up to as falling out of love or losing your religion. Or maybe harder. Religious faith, being beyond the reach of reason, doesn’t have to answer gotcha questions about a previously held position. There’s a special contempt reserved for the political apostate—an accusation of intellectual collapse, an odor of betrayal. When you switch sides, you have to find new friends. Political identities are shaped mainly by factors that have nothing to do with rational deliberation: family and tribal origins, character traits, historical currents. In “Partisan Hearts and Minds,” published in 2002, three political scientists made an empirical case that political affiliations form in early adulthood and seldom change. Few people can be reasoned into abandoning their politics.

END_OF_DOCUMENT_TOKEN_TO_BE_REPLACED

Shortly after the National Socialist party consolidated their power, a writer named Peter Bender convinced some Nazi brass to attempt an experiment that, if successful, would send a rocket from Magdenburg to New Zealand. The intercontinental ballistic missile was still decades away from completion, but Bender believed he had figured out how to attack the other side of the Earth—by firing directly into the sky.

He had come under the influence of an American occult group that believed in a particularly bizarre variation on the Hollow Earth theory. While the concept of habitable layers beneath the Earth’s crust had been popular for centuries amongst occultists, Bender’s Hohlwelt-theorie argued that the Earth was a vault within an endless field of matter. The sun was somewhere in the middle of this vault, and the stars in the sky were the lights of cities from the other side.

“An infinite universe is a Jewish abstraction,” wrote Bender. “A finite, rounded universe is a thoroughly Aryan conception.” The anti-Semitic aspect of the theory attracted the attention of Herman Göring but was quickly dismissed in favor of Hanns Hörbiger’s slightly less fanciful World Ice Theory. The idea nonetheless remained compelling to some, and the German Navy attempted to locate British fleets using astronomical instruments.

Hollow Earth and World Ice theories were only two particularly laughable examples of a Nazi cultural regression that included radical alterations in the fields of mathematics, psychology, and physics. It is arguable that the rejection of Einstein’s theory of relativity in place of Deutsche Physiks prevented the Nazis from developing nuclear technology and many other weapons. Some historians similarly argue that the eugenic fervor of the Master Race ideology, which paved the way to the Final Solution, diverted resources to an extent that helped cost Hitler the war.