FIELD republishes today this 1969 letter exchange between Theodor Adorno and Herbert Marcuse on the German student protest movement. First appearing in the New Left Review in January-February 1999, these letters are too relevant to the present moment to be consigned to the place of memorabilia. In them, we sense the foundational common code of friendship that tied these thinkers together, despite profound theoretical disparities which their words suggest are irreconcilable. Today’s urgency to engage politically with pressing matters such as the cost of human lives for the maintenance of the status quo, the resurgence of neo-fascist rhetoric in the public sphere, and the United States’ military involvement in foreign affairs, make these authors’ exchange as relevant as it was almost four decades ago. Like “Teddy” and Herbert, today’s academics need to reconsider how to reconcile theory with the violence of police brutality, imperialist intervention in remote geographies, and the need for new forms of political contestation. Writing at times of vigorous student protest movements in Germany and California, Adorno and Marcuse exemplified different takes on the political responsibility of scholars, poles that appear still unaltered in today’s multifaceted attack on the autonomy and sustainability of public higher education around the globe. Their conversation is testimony to the propensity of academic labor to forget its inscription in the world and its indebtedness to it. The original New Left Review publication (I: 233, January-February 1999) can be found here: https://newleftreview.org/I/233/theodor-adorno-herbert-marcuse-correspondence-on-the-german-student-movement.

END_OF_DOCUMENT_TOKEN_TO_BE_REPLACED 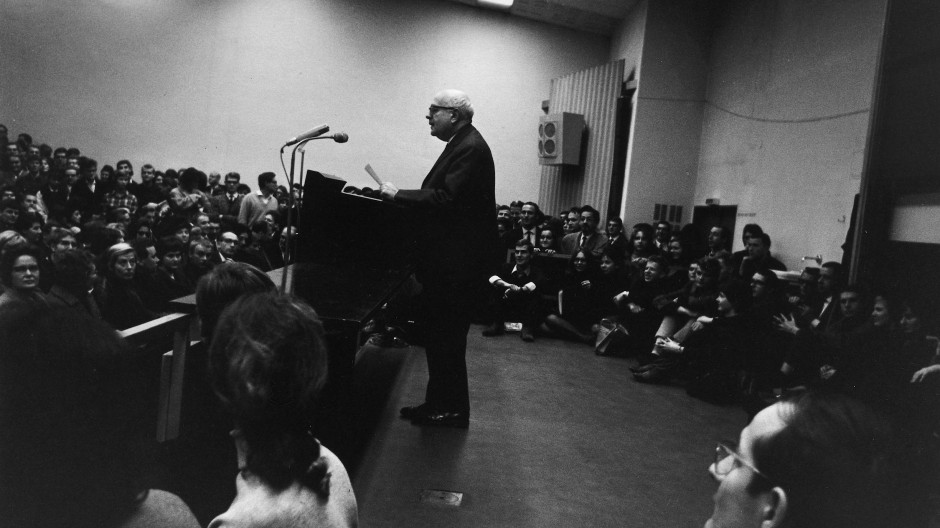 Theodor W. Adorno inspired much of Germany’s 1960s student movement, but he came increasingly into conflict with this movement about the practical implications of his critical theory. Others – including his friend and colleague Herbert Marcuse – also accused Adorno of a quietism that is politically objectionable and in contradiction with his own theory. In this article, I reconstruct, and partially defend, Adorno’s views on theory and (political) praxis in Germany’s 1960s in 11 theses. His often attacked and maligned stance during the 1960s is based on his analysis of these historical circumstances. Put provocatively, his stance consists in the view that people in the 1960s have tried to change the world, in various ways; the point – at that time – was to interpret it.

The melancholy science, from which I make this offering to my friend, relates to a realm which has counted, since time immemorial, as the authentic one of philosophy, but which has, since its transformation into method, fallen prey to intellectual disrespect, sententious caprice and in the end forgetfulness: the teaching of the good life. What philosophy once called life, has turned into the sphere of the private and then merely of consumption, which is dragged along as an addendum of the material production-process, without autonomy and without its own substance. Whoever wishes to experience the truth of immediate life, must investigate its alienated form, the objective powers, which determine the individual existence into its innermost recesses. To speak immediately of what is immediate, is to behave no differently from that novelist, who adorns their marionettes with the imitations of the passions of yesteryear like cheap jewelry, and who sets persons in motion, who are nothing other than inventory-pieces of machinery, as if they could still act as subjects, and as if something really depended on their actions. The gaze at life has passed over into ideology, which conceals the fact, that it no longer exists.

END_OF_DOCUMENT_TOKEN_TO_BE_REPLACED

The Meaning of Working Through the Past (Adorno, 1959)

The question “What does working through the past mean?” requires explication. It follows from a formulation, a modish slogan that has become highly suspect during the last years. In this usage “working through the past” does not mean seriously working upon the past, that is, through a lucid consciousness breaking its power to fascinate. On the contrary, its intention is to close the books on the past and, if possible, even remove it from memory. The attitude that everything should be forgotten and forgiven, which would be proper for those who suffered injustice, is practiced by those party supporters who committed the injustice. I wrote once in a scholarly dispute: in the house of the hangman one should not speak of the noose, otherwise one might seem to harbor resentment. However, the tendency toward the unconscious and not so unconscious defensiveness against guilt is so absurdly associated with the thought of working through the past that there is sufficient reason to reflect upon a domain from which even now there emanates such a horror that one hesitates to call it by name.

END_OF_DOCUMENT_TOKEN_TO_BE_REPLACED

On the Concept of Beauty (Adorno)

It is my intention to introduce the consideration of the central aesthetic concept, namely the concept of beauty, by discussing one of the first major texts to contain something like a theory of beauty. The text in question is a section from Plato’s Phaedrus, approximately chapters 30 to 32 according to the famous Stephanus pagination. (1)

Now, you could say first of all that it is rather strange to begin an examination of the concept of beauty by drawing on a passage of a somewhat mythological, dogmatic and certainly pre-critical character such as this one by Plato. I have chosen this passage because it demonstrates that Plato was a philosopher after all, not a mythologist; that is, all of the decisive motifs which later appear in the philosophical theory of beauty are collected in this exegesis, somewhat akin to the way that, in the introductions to certain great symphonies, the most important themes are present as if under glass and are then developed in the course of the symphony itself. So I can here present to you in statu nascendi, as it were in an almost prehistoric form, the motifs that dominate the discussion of the concept of beauty.