The Wreck of the Plaza

In an epoch characterized by disequilibria political and economic, none has been more perplexing than the inability to match means with ends. Everywhere, violent eruptions find no demand or objective around which to cohere, while struggles for the most minor of reforms burn with revolutionary intensity. Either the means overrrun their ends, or they find no end at all. In Turkey and Brazil, demonstrations over a change in the price of transit, or the development of a city park, provoke violent conflicts of an almost insurrectionary intensity. In France, teenagers barricade their schools against the withdrawal of a pension that is as yet fifty years off. Any pretext, any provocation can become the adventitious occasion for mobilization of antagonism that finds no outlet, no name or program. Do we suppose that French kids are really concerned about what will happen to them once they are ready to retire? Does any young person expect the current social order to last that long? What can it mean when a .20 real increase in transit fares becomes the occasion for petrol bomb attacks on the National Assembly, when a conflict over a half acre of green space sets in motion a national uprising involving millions? What can be glimpsed through this gap between tactics and strategy, discourse and praxis, between the slogans and signage of a social movement and what one is willing to do with friends and strangers on a given evening after the future has come to an end?

Three years ago we wrote from an absent future we had encountered on the grounds of the American university. Today, the absence of that future is everywhere present. Neither capital nor its would-be antagonists can provide a compelling portrait of the next decade, let alone the next century. All the sci-fi utopias of flying cars and robot servants, of full automation and zero work, seem truly ridiculous. No one can imagine capitalism providing a series of progressive social reforms, any more than they can imagine seizing the state and the economy to provide a more egalitarian distribution of resources. No, the future presents only as ruin, apocalypse, burning metal in the desert. There is no possibility of an instrumental linking of means to ends, a linking of people to party, party to program. Everywhere, means exceed their ends; everywhere, the registration of social catastrophe must find its occasion lacking any remedies carried forward from the past. In such a conjuncture, the masses are opportunists; they find in immediate and often trivial demands an opportunity to mobilize grand antagonisms which otherwise find no clear expression.

END_OF_DOCUMENT_TOKEN_TO_BE_REPLACED 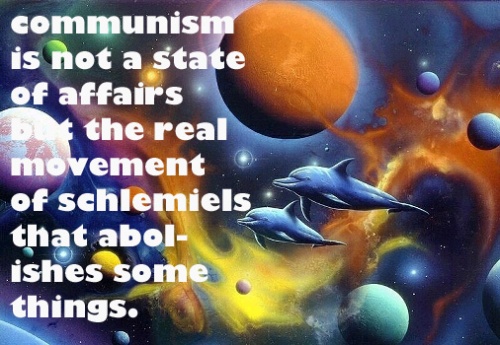 Sometimes people ask us, when will the communists in situ do something political? When will they finish the film on Brazil? When will they bless us with their final analysis on the leberwurst mode of production? When will they unify the fragments of the proletariat into a new technoparty that can actually overthrow boredom? We can only answer with the following story:

In the second half of the 1960s I traveled repeatedly from England to Belgium, partly for study purposes, partly for other reasons which were never entirely clear to me, staying sometimes for just one or two days, sometimes for several weeks. On one of these Belgian excursions which, as it seemed to me, always took me further and further abroad, I came on a glorious early summer’s day to the city of Antwerp, known to me previously only by name. Even on my arrival, as the train rolled slowly over the viaduct with its curious pointed turrets on both sides and into the dark station concourse, I had begun to feel unwell, and this sense of indisposition persisted for the whole of my visit to Belgium on that occasion. I still remember the uncertainty of my footsteps as I walked all round the inner city, down Jeruzalemstraat, Nachtegaalstraat, Pelikaanstraat, Paradijsstraat, Immerseelstraat, and many other streets and alleyways, until at last, plagued by a headache and my uneasy thoughts, I took refuge in the zoo by the Astridplein, next to the Centraal Station, waiting for the pain to subside. I sat there on a bench in dappled shade, beside an aviary full of brightly feathered finches and siskins fluttering about. As the afternoon drew to a close I walked through the park, and finally went to see the Nocturama, which had first been opened only a few months earlier. It was some time before my eyes became used to its artificial dusk and I could make out different animals leading their sombrous lives behind the glass by the light of a pale moon.