It is often asserted that West German New Leftists “discovered the Third World” in the pivotal decade of the 1960s. Quinn Slobodian upsets that storyline by beginning with individuals from the Third World themselves: students from Africa, Asia, and Latin America who arrived on West German campuses in large numbers in the early 1960s. They were the first to mobilize German youth in protest against acts of state violence and injustice perpetrated beyond Europe and North America. The activism of the foreign students served as a model for West German students, catalyzing social movements and influencing modes of opposition to the Vietnam War. In turn, the West Germans offered the international students solidarity and safe spaces for their dissident engagements. This collaboration helped the West German students to develop a more nuanced, empathetic understanding of the Third World, not just as a site of suffering, poverty, and violence, but also as the home of politicized individuals with the capacity and will to speak in their own names. READ PDF

The Dialectic of Sex (Shulamith Firestone, 1970)

Shulamith Firestone  – The Dialectic of Sex (1970)

In the following chapters we shall assume this definition of historical materialism, examining the cultural institutions that maintain and reinforce the biological family (especially its present manifestation, the nuclear family) and its result, the psychology of power, and aggressive chauvinism now developed enough to destroy us. We shall integrate this with a feminist analysis of Freudianism: for Freud’s cultural bias, like that of Marx and Engels, does not invalidate his perception entirely. In fact, Freud had insights of even greater value than those of the socialist theorists for the building of a new dialectical materialism based on sex. We shall attempt, then, to correlate the best of Engels and Marx (the historical materialist approach) with the best of Freud (the understanding of inner man and women and what shapes them) to arrive at a solution both political and personal yet grounded in real conditions. We shall see that Freud observed the dynamics of psychology correctly in its immediate social context, but because the fundamental structure of that social context was basic to all humanity – to different degrees – it appeared to be nothing less than an absolute existential condition which it would be insane to question – forcing Freud and many of his followers to postulate a priori constructs like the Death Wish to explain the origins of these universal psychological drives. This in turn made the sicknesses of humanity irreducible and incurable – which is why his pro posed solution (psychoanalytic therapy), a contradiction in terms, was so weak compared to the rest of his work, and such a resounding failure in practice – causing those of social/political sensibility to reject not only his therapeutic solution, but his most profound discoveries as well. . . [PDF]

The Unhappy Marriage of Marxism and Feminism 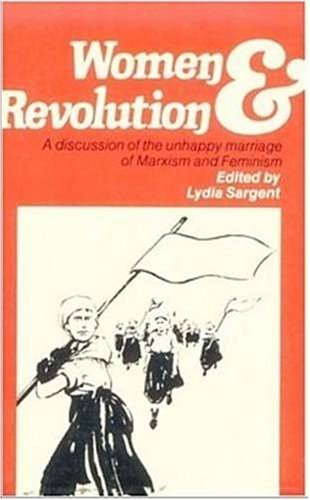 Women and Revolution  (1981) deals with contemporary feminist political theory and practice. It is a debate concerning the importance of patriarchy and sexism in industrialized societies – are sexual differences and kin relations as critical to social outcome as economic relations? What is the dynamic between class and sex? Is one or the other dominant? How do they interact? What are the implications for social change? The principle essay to which the others respond – either criticizing it, extending, or attempting to improve it – is The Unhappy Marriage of Marxism and Feminism by Heidi Hartmann. Hartmann argues that class and patriarchy are equally important and that neither a narrow feminism nor an economistic Marxism will suffice to help us understand or change modern society – instead we need a theory that can integrate the two analyses. The twelve contributors to this discussion are: Iris Young, Christine Riddiough, Gloria Joseph, Sandra Harding, Azizah ai-Hibri, Carol Ehrlich, Lise Vogel, Emily Hicks, Carol Brown, K.aties Stewart, Ann Ferguson & Nancy Folbre, Zillah Eisenstein.

Communism does not exist in the singular. The common is no unity that would encompass everything by subordinating it to an idea, will, or central committee. The common is rather that which the many share with one another, as equals and free in solidarity.

At the same time, communism was repeatedly understood like this: a final sublation of social divisions into an overarching harmony. Thousands of communist parties and factions of the past dreamt in this way of the future: the troublesome dispute with enemies as well as with comrades would finally find an end when the whole world would see that just this one, one’s own party program is the right one. To be signed by everyone. Even, and especially, the Communist Party of the SovietUnion (Bolsheviks), for a long time the largest and most influential communist party, followed this dream. In a spiraling movement that begins even before 1917 and finds its climax in the Stalinism of the late 1930s, it combatted initially the monarchist and bourgeois parties, then the allied social-democratic, social-revolutionary and anarchist parties and ultimately, when all other parties were prohibited, the oppositions, fractions, currents and platforms within itself. As it had, according to its own conviction, a privileged insight into the truth of the social, it believed itself able to represent the common in all its parts: the population was represented in the working class, the class in the party, the party in the central committee, the central committee in the general secretary. The party line that was issued by the latter would lead into the communist future, no matter however much zigzag it would entail. Whoever would deviate from this deviating course was guilty. The counter term to identity was thus not difference, but opposition. “Other” became synonymous with “inimical”. Until its demise, the Soviet leadership saw itself surrounded by inner enemies. Wherever social initiatives cropped up, it was safer to oppress them. This mistrust worked as self-fulfilling prophecy. Eventually, the protesting people did (preponderantly in fact) not want a more democratic, more humanist or more friendly socialism, as was still the case in the 1920s, 1950s and 1960s, but rather no socialism at all.