A Guide to Swearing in Yiddish 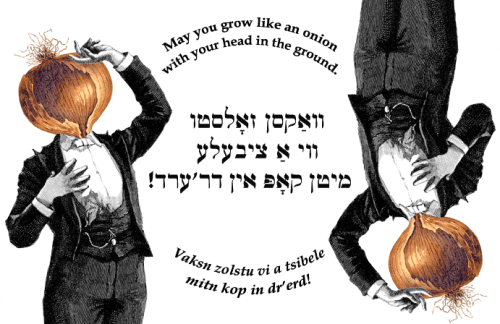 Shtup (SHTUHP) – To have sex with. The connotation is the “four-letter word” kind. Generally most of the words on this list that start with “sh” are going to have the emphasis on that syllable.

Shmuck (SHMUCK) – Penis. All of them. Every last one of these following terms. I’ll let you know when we’ve reached the end of the cavalcade of dicks.

Fakakta (fuh-COCK-tah) – “Fucked up” (hey, look, we’ve exited the magical forest of dongs!). This is my personal favorite term on this list. Goes very well with the modifier “all,” as in, “the Senate’s filibustering procedure is all fakakta.”

Alta Kaka (AL-ta COCK-ah) – Literally, “old shit.” Weirdly, not hugely derogatory in common usage (typically used to refer to senior citizens in general), but that’s Yiddish for you; even the words we don’t intend to be offensive have that soupcon of a linguistic middle finger to them.

Kvetch (KVETCH) – To complain/a complainer. I spent my entire childhood being referred to by this term. Then again, so did a lot of Jewish kids.

Shmegegge (shmuh-GEH-gee) – A jerk. My other favorite, since very few people use it and it’s the silliest-sounding word I have ever heard, narrowly edging out “periwinkle.” I’ve heard some variants on the definition of this one, but I’m going with my Grandfather here, who loved the living hell out of this word and was adamant that the closest comparable term in modern English was “jerk.”

Plotz (PLOTZ) – To become so overwrought that you are going to figuratively explode. “I’m going to plotz” is a fairly common term among old Jewish grandmothers. Oddly, this can be used both as a positive (“If I laugh any harder I’ll plotz”) and as a negative (“If these grandkids don’t stop running around and shut the hell up I’m going to plotz”).

Shlemiel (shlah-MEEL) / Schlimazl (shlih-MAHZ-ull) – There’s some disagreement over what these two terms actually mean, and which one means which. Some sources pin one as “an unlucky person,” basically someone who the universe constantly craps on, while the other is a klutz (also a Yiddish word originally, but common enough that there’s no point in putting it on this list). Since Yiddish is largely a dead language, feel free to use them interchangeably towards either meaning.

Goyim (GOY-im) – Non-Jews; a less polite version of “gentile.” Whether or not this term is considered offensive is entirely dependent on who you talk to (and probably also the particular usage).

Verklempt (ver-KLEMPT) – To get choked up. Even Jews laugh at how silly this word sounds.

Ferschnicket (feh-SHNICK-it) – Drunk off your ass. Like, Purim-level drunk. Have you ever seen those “please drink responsibly” commercials? Yeah, “Purim-level drunk” could be defined as “the diametric opposite of those commercials.” Our actual religious texts tell us to get so drunk for one day a year that we can’t tell the difference between a man and a woman. I’m not making that up; you can look it up, the book says that in those exact words. Purim-level drunk is not for amateurs. 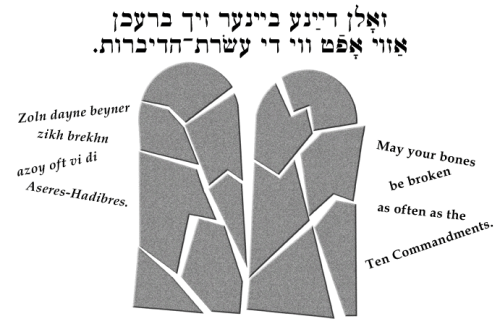 Oy Vey (OY VAY) – This one is tricky to translate. The general idea of what this means is just a creative way of saying, “UGH,” as in response to an article written by an MRA. Generally only said in a put-upon tone of voice.

Oy Gevalt (OY gee-VAULT) – As above, although the way my grandmother used to say it the connotation changed to something with a bevy of four-letter words. Generally said when something is REALLY annoying and “Oy vey” doesn’t cut it as an exclamation of how irritated you are.

Tuches (TOOK-us) – Ass. This one’s weird, because it’s taken on a much less offensive connotation in modern English usage (although I guess that’s not that weird, since modern English is way more polite than Yiddish ever was).

Shmendrick (SHMEN-drick) – A weak person – generally, this term is used to belittle someone for being physically small.

Shep Naches (SHEP NAK-us) – To derive pleasure from something. My grandmother used to swear that this literally meant “to shit joy,” although she may have just been fucking with me.

Pisher (PISH-er) – Literally a “bed-wetter,” though it can also be used to refer to someone who is inexperienced or unimportant. Often preceded by the word “little.”

As di bubbe volt gehat beytsim volt zi gevain mayn zaidah (AS DEH BUH-bee VOLT ge-HAT BAYT-sihm VOLT ZEH ge-VAYN MAY-n ZAY-deh) – “If my grandmother had balls she would be my grandfather.” In context, used as a sarcastic response if someone says something like, “I’d be a great model if I was 5 inches taller and 30 lbs lighter.” We’re a very sarcastic people.

One Comment to “A Guide to Swearing in Yiddish”