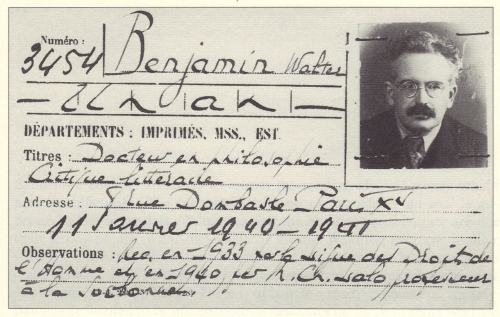 A religion may be discerned in capitalism – that is to say, capitalism serves essentially to allay the same anxieties, torments, and disturbances to which the so-called religions offered answers. The proof of the religious structure of capitalism – not merely, as Weber believes, as a formation conditioned by religion, but as an essentially religious phenomenon – would still lead even today to the folly of an endless universal polemic. We cannot draw closed the net in which we are caught. Later on, however, we shall be able to gain an overview of it.

Nevertheless, even at the present moment it is possible to distinguish three aspects of this religious structure of capitalism. In the first place, capitalism is a purely cultic religion, perhaps the most extreme that ever existed. In capitalism, things have no meaning only in their relationship to the cult; capitalism has no specific body of dogma, no theology. It is from this point of view that utilitarianism acquires its religious overtones. This concretization of cult is connected with a second feature of capitalism: the permanence of the cult. Capitalism is the celebration of the cult sans reve et sans merci [without dream or mercy]. There are no “weekdays.” There is no day that is not a feast day, in the terrible sense that all its sacred pomp is unfolded before us; each day commands the utter fealty of each worshipper. And third, the cult makes guilt pervasive. Capitalism is probably the first instance of a cult that creates guilt, not atonement. In this respect, this religious system is caught up in the headlong rush of a larger movement. A vast sense guilt that is unable to find relief seizes on the cult, not to atone for this guilt but to make it universal, to hammer it into the conscious mind, so as once and for all to include God in the system of guilt and thereby awaken in Him an interest in the process of atonement. This atonement cannot then be expected from the cult itself, or from the reformation of this religion (which would need to be able to have recourse to some stable element in it), or even from the complete renouncement of this religion. The nature of the religious movement which is capitalism entails endurance right to the end, to the point where God, too, finally takes on the entire burden of guilt, to the point where the universe has been taken over by that despair which is actually its secret hope.

Capitalism is entirely without precedent, in that it is a religion which offers not the reform of existence but its complete destruction. It is the expansion of despair, until despair becomes a religious state of the world in the hope that this will lead to salvation. God’s transcendence is at an end. But he is not dead; he has been incorporated into human existence. This passage of the planet “Human” through the house of despair in the absolute loneliness of his trajectory is the ethos that Nietzsche defined. This man is the superman, the first to recognize the religion of capitalism and begin to bring it to fulfillment. Its fourth feature is that its God must be hidden from it and may be addressed only when his guilt is at its zenith. The cult is celebrated before an unmatured deity; every idea, every conception of it offends against the secret of this immaturity.

Freud’s theory, too, belongs to the hegemony of the priests of this cult. Its conception is capitalist religious thought through and through. By virtue of a profound analogy, which has still to be illuminated, what has been repressed, the idea of sin, is capital itself, which pays interest on the hell of the unconscious.

The paradigm of capitalist religious thought is magnificently formulated in Nietzsche’s philosophy. The idea of the superman transposes the apocalyptic “leap” not into conversion, atonement, purification, and penance, but into an apparently steady, though in the final analysis explosive and discontinuous intensification. For this reason, intensification and development in the sense of non facit saltum are incompatible.(1) The superman is the man who has arrived where he is without changing his ways; he is historical man who has grown up right through the sky. This breaking open of the heavens by an intensified humanity that was and is characterized (even for Nietzsche himself) by guilt in a religious sense was anticipated by Nietzsche. Marx is a similar case: the capitalism that refuses to change course becomes socialism by means of the simple and compound interest that are functions of Schuld (consider the demonic ambiguity of this word).(2)

Capitalism is a religion of pure cult, without dogma.

Capitalism has developed as a parasite of Christianity in the West (this must be shown no just in the case of Calvinism, but in the other orthodox Christian churches), until it reached the point where Christianity’s history is essentially that of its parasite – that is to say, of capitalism.

(1) Non facit saltum: Latin for “he cannot make the leap.” In rationalist philosophy, the phrase expresses the notion that God leaves no gaps in nature.

(2) The German word Schuld means both “debt” and “guilt.”